These pieces are from my new Covid altered book, Kurt Cobain’s journals. I know it’s ridiculous but it seems right for all kinds of reasons. Anyway I started putting these burial mound drawings in it: 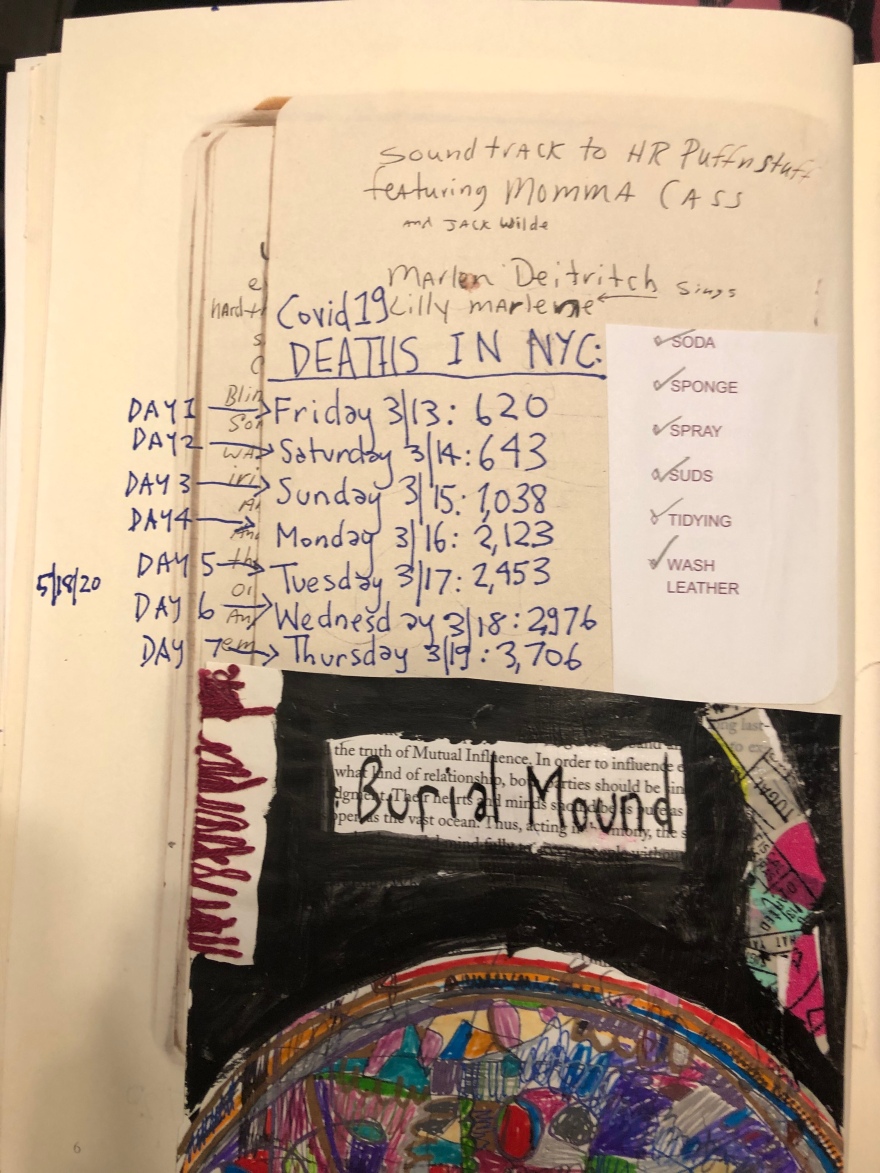 The above has a list of numbers dead each day of my Quarantine count; of course people we’re dying of it before then, but this was the point where staying home could save lives and was not safe to go out.

I can’t remember if I’ve written about this new art project. Probably at some point last week. I thought about Burial Mounds after looking at the mounds created in my altered book, layers of buts of paper built up with Mod Podge .

Then I got excited to make a bigger 3D looking one which I haven’t destroyed. That led to drawing them and starting a collage painting of one. They just look like round small hills, but I’m trying to add layers both building out and up. In the case of the 3D one made of ripped up pieces of the book, it was also the burial/death of the book, even though I had no plan to completely destroy it.

Anyway, I did get excited to stumble on this concept and have it be so relevant in many metaphorical ways. Living in the metaphor is part of working as an art therapist that most people don’t understand or need to understand.

There is a correlation between 9/11 and the dead and Coronavirus and the dead. In 9/11, they were down here looking for any living people buried under the rubble and also finding dead people and parts of dead people. The big funeral trauma besides everything else can be and was having a mangled body, having some body parts, or objects or having no body whatsovever. Even if you want to cremate, you obviously don’t want the event to cremate your loved one burning them up before you can properly mourn them and have their ashes.

I know this is macabre, but I am definitely one who dwells in that space. I love watching “Ask a Mortician” on Youtube and have read all her books. I loved Six Feet Under when it came out and am watching it again during this quarantine.

When I noticed that I was unwittingly building towards building burial mounds, I got excited to make more of them and learn more about them. I associated them with ancient civiliazations but not the Egyptians, though many cultures who make burial mounds do leave objects with their loved ones. I thought of Native Americans and hit a blank as I really know nothing about Burial Mounds and their origin, or how many different cultures have/had them as cemetaires, but it does answer my big question from childhood which was about how and what are we going to do with the dead bodies one day when all the cemetaries are filled and there are no places to put them. It would have been great to have had Caitlin Doughty’s book “Will My Cat Eat My Eyeballs” back then, where she answers kids’ interesing questions about death.

The other correlation between Covid 19 and 9/11, though the “numbers” of people killed may be vastly different, is the environment of death and loss, this fog hanging over the city that is more invisible than 9/11, there’s a disjointed feeling in the air and nobody’s life is as it was. Besides being able to smell the burning/the lingering smells that started on 9/1, no matter where you were within a bunch of miles of Ground Zero. The smell lingered, and in this case it’s different.

The pile up of numbers feels like a burial mound, but I picture a futuristic mound, where the dead are piled up and each have numbers or something that makes them all the same.

The tributes to the dead are everywhere and don’t connect. You don’t get to see your loved one dying or see them die, or see them as a dead body.

I think one reason cultures need a lot of ritual and cycle of life rituals (bury the dead in the earth, then go to the house to eat) is to convince themselves this person really doesn’t exist any more and you can never see or interact with them again, and like a burial mound, the bottom of this mound is the knowledge that one day it will be you who is dead.

Maybe humans had to remind themselves they would die and could  at any time far back into many cultures. Even those with elaborate stories of after life, seeing the dead of course reminds us of our own precarious lives, but also in the case of maybe the cave person, it may have reminded them to put as few people in danger as possible. I think a lot about the guarding of the cave and the changing of the guard.

This may not have been true. We make up all kids of stories, but I see the one person waking up at 4pm, probably the cave people all slept in times of 4 hours. This is why during the witching hour really is true; hospital personel report that there are more deaths of heart attacks around 3am. That would be the last hour of the watch and the guard might be getting sleepy and more vulnerable to a predator. Perhaps the stress involved caused heart attack.

Anyway, memento mori, remember you shall die, is true always with humans and maybe other beings like elephants, seems to be a thing we have lived with since there have been humans.

Sitting in your house right now, not seeing any dead bodies, maybe hearing sirens or not hearing any, it may be hard to really believe that in this moment, there are an extreme amount of ill people dying today, more than usual and caused by Covid. What does it mean when most of the deaths are caused by one thing?

The extra death going on and the slowing down of things being in your house because you were asked to, and you know you’re protecting people from you getting sick and “killing” someone wtih it. Turn on the news. Does the talk of how many died make it “real”. The removal of the connection between people who are alive and their recently dead loved or hated one, that is not natural.

It’s a very weird kind of separation and abandonment. I don’t know if any of the OBject Relations people have written about it. It’s not the feeling that your parent abandoned you by dying. It’s the idea that since you cannot see the dead body, something you should have is not being given to you. You are abandoned to your own grief with no coffin, body or coming king of loss and feasting. Maybe getting ashes does something, maybe it’s the gathering of live people to talk about the dead and then celebrate life by eating and being close to each other, the opposite of physical/social distancing.

The jury is still out about how far distant you’d need to be from a Covid dead person if you might catch it or if you can touch the body. according to Caitlin Doughty. She made a video about it, as she talks a lot about how being close to a dead body will not make you sick.

Photos of My Work and Patient Art Work